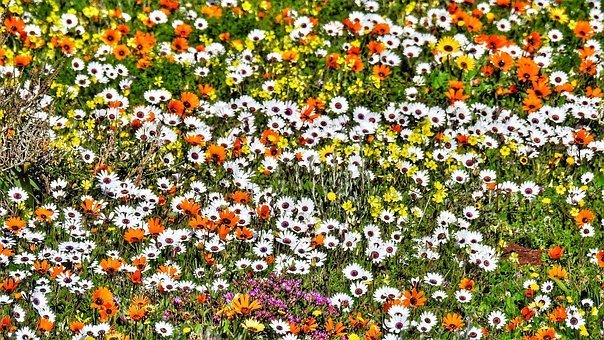 Namaqualand Daisies (Dimorphotheca sinuate) are easy to grow winter and spring flowering annuals which are sown directly into sunny garden beds in autumn. They will grow quickly to about 30cm tall and 30cm wide, and their daisy flowers come in the traditional bright orange and yellow, as well as pastel shades like salmon, cream and pure white. These showy indigenous annuals belong to the genus Dimorphotheca, a southern African genus consisting of 15 species. Dimorphotheca is a member of the daisy family (Asteraceae), which includes well-known members like cosmos, everlastings, chrysanthemums, sunflowers, and blackjacks, and the name “Dimorphotheca” means ‘fruits with two forms’, referring to the two different kinds of seeds produced in some species, with some producing wingless and stick-like fruits, while others form flattened 2-winged seeds. The name “sinuate” means ‘wavy edged’ or ‘sinuous’ and is in reference to the wavy leaf margins. Namaqualand daisies grow naturally in the winter-rainfall regions of South Africa, from Saldanha Bay in the Western Cape to Namaqualand in the Northern Cape, and extending into Namibia. They grow wild in sandy or disturbed places, and are renowned worldwide for the abundance of flowers they produce, carpeting the bare veldt from mid-winter to spring (August to October), and drawing visitors from far and wide to see the spectacular show they put on in Namaqualand, after good winter rains. Namaqualand daisies also adorn many gardens at this time, and remain a favorite for gardeners because they are economical, water-wise, and easy to grow from seed sown directly into garden beds. An added bonus is that at the end of the growing season you can collect seeds to sow next season, so you only have to buy them once. These daisies will attract butterflies and bees to the garden, providing a vital food resource at a time of year when nectar is scarce, so even if you have a small garden, sow a small packet this autumn and you will find yourself adding these lovely flowers to your garden each year.  Namaqualand daisies are used as a low cover around shrubs in hot, sunny beds, or as the focal point in mass plantings. They make cheerful fillers amongst dormant roses, and pretty borders, so sow them in mass into large beds, rockeries or borders for hassle-free winter and spring colour.

These easy to grow winter annuals are sown directly into garden beds in autumn. They require as much sunlight as you can provide as the flowers only open in the sun and will close at night or on overcast days. They grow quickly to about 30cm tall and 30cm wide, and are hardy to severe frost. In your seed packet you are likely to find both types of seed i.e. the well-known “flake” seed (a light, disc-shaped cream seed) and a dry or “stick” seed. Never throw away the small little stick-like seeds as they will germinate and produce the same species. In the winter rainfall regions seeds are sown in late autumn or early winter (April to May), and in the rest of the country they are best sown when the daytime temperatures are between 18 to 22°C.Namaqualand daisies will adapt to most garden soils with good drainage but love light, well-drained soil. Prepare the beds by digging them over well, breaking down any clods of soil and removing stones, and in poor soils the addition of some compost will do wonders. Once the beds are prepared water the ground before you sow as a wet bed makes it easier for the light seed to stick to the surface of the soil. Choose a calm, wind-free day to sow or the winged seeds may just blow away. Sprinkle the seeds evenly across the bed and then lightly rake them in, or you can cover the seed with about 2cm of soil, also raking it in lightly. To eliminate any air spaces between the soil and seed, which could be fatal to the tender emerging radicle, it is important to gently press the soil down. This can be done by hand, or by rolling the soil with a piece of plastic piping, or even by pressing it down with a flat plank. Finish off with a light sprinkling of water with a fine hose. Keep the soil moist but not soggy until the seeds germinate, and when the young plants are a few centimeters tall, thin them out to space them about 20 to 25cm apart. Namaqualand daisies will take anything from 4 to 14 days to germinate, and will flower about 3 months after sowing. In the winter rainfall regions, once the seedlings have established themselves they will not need supplemental watering, but in the summer rainfall regions they will require moderate watering throughout winter.  The brownish seeds with their papery wings appear soon after the flowers wilt, and because they are easily blown away by the wind, if you wish to collect some to sow again next season, they need to be collected as soon as they become brown. Collecting seed has always been a favorite with small children, and sowing them again next season from their own seeds is even more exciting.

As the weather warms up in spring, aphids can become a problem. They can be treated with insecticidal soap. Ensure that the plants are correctly spaced to allow for good airflow around the leaves as this discourages fungal infections.